Yet another band to grace the pages of Forgotten Sons whose music has only seen the light of day in the last year or so: American progressive trio Glass. The band existed in the early seventies and originated from the Pacific Northwest. It seems that the band played quite an extensive number of concerts and they made a name for themselves on the college and coffee house circuit playing a musical style very similar to what Emerson, Lake and Palmer were creating.

As often happens with such bands, they tend to go unnoticed by record labels with the resultant effect that their music tends not to be released and sometimes discarded. Luckily, Glass held onto their tapes and now have been able to release them in a double CD format, much to the pleasure of progressive rock fans.

First of all one must mention the main fulcrum of the band, which was the Sherman brothers Greg and Jeff. Both seemed to have been involved in the song writing duties with Greg playing the keyboard/piano/mellotron parts and Jeff concentrating on the guitar/bass and sometimes piano parts. The remaining link in the band was the drummer, a duty shared by two musicians during the Glass career, Jerry Cook and Paul Black.

The band's earliest recording that seems to exist is from 1972, suggesting that the band started their career together around that time. A career that seems to run till 1978. The first line-up has Jerry Cook playing with the band till roughly 1975. Throughout this time, the band were trying hard to secure a record contract, with Jeff Sherman even going to England, birthplace of the musical style the band played, and even secured contacts with Sean Murphy, manager of Soft Machine and David Apps of Evolution Management, both of whom expressed interest in the band.

However, on his return to the States, he found that Cook had suddenly left the band. This was the beginning of the end of Glass, just when everything seemed to be falling into place for them! The replacement for Cook was Paul Black, no easy feat when one realises that Cook had been with the band since its inception. Black was a close friend of the band and already knew the parts, thus making the transition somewhat more smoother, though his style of playing had a more rock orientated and hard hitting approach, something which affected the band's style of playing.

However the end of the seventies was a hostile climate to any band that played progressive rock and only the strongest were likely to survive. A band with no record contract such as Glass was unlikely to ride the storm and the late seventies saw the band move to New York City in a last ditch attempt to revive their career. When all else failed, the band disbanded and faded away, that is until the late nineteen nineties. In 1999, the members of Glass decided that the name of Glass could be resurrected once again especially with the rekindling of interest in the progressive rock scene. The result was the CD No Stranger To The Skies on Relentless Pursuit Records (RD4128) which included both studio and live material from the seventies, material that till then had never seen the light of day.

Furthermore in 2001, a reunion concert was held on the 19th May together with an appearance at the first ProgWest Festival alongside bands such as Maximum Indifference and Djam Karet. Also in the pipeline is the release of further unissued material from the seventies related to Glass as well as possible new recordings. If you didn't catch them the first time around, you might just do so this time! 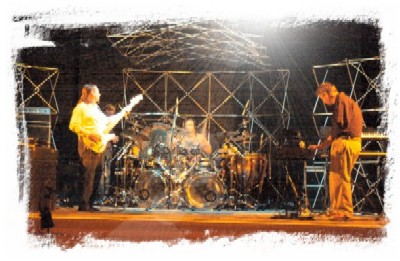 Glass - No Stranger To The Skies

All Tracks composed by Jeff and Greg Sherman

A double CD of unreleased material spanning four years of recordings and gigs, No Stranger To The Skies, once again underlines the tragedy of "modern" music whereby bands who demonstrate an amount of promise still fail to get the necessary contacts and contracts and make it into the big league.

Strangely enough the earliest material from the band's repertoire is not a studio recording but the live opus Broken Oars, which in itself is further subdivided into six sections. Recorded between February 6th and 7th 1973 at the Port Townsend High School Auditorium. The track is a perfect example of the bombastic influence by bands such as Emerson Lake & Palmer on this trio of musicians. The introductory theme, Awakening, builds up in a slow crescendo to then break out with timpani rolls into Realization which sets the centre stage for what the band were capable of. The interplay between the keyboards/organ and drums is incredible while the bass guitar shoulders the responsibility of bearing the framework of the track. Fear introduces a number of new concepts with the group moving away from the straight forward power trio format on previous tracks. The piano takes up a more prominent role allowing for excursions into relatively new territory as well as adding a new dimension to the band's sound. Furthermore it is on this track that we get a glimpse of the band's ability to portray different shades of musical light, something which they build upon on Childhood's Reflection with the acoustic guitar solo which comes as a breather after the heavy organ work that preceded this track. Final Realization rekindles the power trio format with some heavy doshing with the epic track closing off with a reprise of the main theme in Acceptance.

The final two tracks from the 1973 period are Home and Patrice Mersault's Dream, both of which were recorded between June 30 and July 2 at The Arcadia Barn in Port Townsend, Washington. Home is one of the more moving pieces on the album with its acoustic guitar work accompanied with what was then the staple mate of any progressive band, the mellotron. Patrice Mersault's Dream takes its name from the main character in "The Stranger" by Albert Camus and was the first Glass recording to feature a two keyboard sound. A lengthy piece of material the track allows the band to show that they were capable of creating variations on a theme and not just stick to one particular tune and play it out endlessly for the whole of the track. The time signatures are continuously shifting due to some nifty drum playing by Jerry Cook while the alternation between keyboardists adds to the dramaticity of the track.

The next recording session to make its appearance on the album comes from the period February 17th and March 5th 1975 and involved the following tracks, Give The Man A Hand, Domino and The Myopic Stream. Give The Man A Hand can be considered to be just one theme that is played out over and over again with slight variations in key while Domino tends to start off in a rather similar fashion to Give The Man A Hand. However there is one determining difference between the two tracks. Whereas the former tended to have little in terms of variation, the introduction of a guitar, namely Jeff Sherman's Fender Stratocaster, adds a totally new dimension to the band's musical style. Whereas the keyboard was the dominant instrument resulting in a fairly monotonous sound, this time round the band could expand their sonoric effects. A major influence on Jeff Sherman at the time of writing this track was Dave Brubeck's "Time Out" album and the style of playing with a strong jazz tinge can be felt throughout the track. The final track from this particular recording session was The Myopic Stream which features a captivating piano introduction which forms the main fulcrum of all the music on this particular track. Once again their is some exquisite rhythm work both from the drums and bass, though the main reason why this track is one of my favourites from this album is the sharp contrast that the band manage to obtain between the relatively mellow piano interludes and more power charged full blown trio sections.

July 26th and 27th of that same year (1975) saw the band entering the studio with Changer emerging from those sessions. This time round there was also a change in line-up with Paul Black taking over the drum stool. As has already been mentioned, the inclusion of Black within the lineup also brought in a more direct and hard hitting rock influenced approach. Thus Changer is also one of the heaver tracks on the album with some pounding driving drums played out, a sharp contrast to the relatively more technical and delicate material the band were originally playing.

The next recording session to be included on this album occurred on August 17th 1977 at Kaye-Smith recording studio in Seattle, Washington which resulted in the track For Ursula Major And Sirus The Dog Star. Another aspect to note is the inclusion of Jerry Cook, once again behind the drum kit. From what is written on the liner notes, it seems that the band felt that they would have to soon call it a day and felt that they had to create one last masterpiece, ie: go out with a bang! This track is possibly a culmination of all their musical endeavours and brings together all the influences and trademark sounds that Glass had accumulated throughout the years. It features just about everything that one could expect from this trio with delightful solos on both piano and keyboards as well as some delightful interchanging between the two keyboardists. The culmination and highlight of the track is the final Third Movement which features a moving crescendo, a fitting epitaph to this band.

The track I have left for last is also the first and title-track that appears on this compilation, No Stranger To The Skies. The reason for this is that the track itself was worked on over a period of three years in three different recording sessions (1975-1978). The final session also features both Jerry Cook and Paul Black playing together, though Jeff Sherman is absent from the lineup. The track in itself is not the most ground breaking of pieces on the album and is most important in its historical context.

The music that is played on the album cannot be considered to have dated too well as has happened to many of the power trios from the seventies era. On the other hand should you be a fan of this style of music especially of instrumental tracks from bands such as ELP and Triumvirat, then this album should make an extremely interesting and valid addition to your musical collection.

There is as yet no official Glass website. However, Relentless Pursuit Records, which also has released the (insofar) only CD from this band, has a section dedicated to the band as well as possible links to various sites that could provide further information on the band. Furthermore there are various sound samples from this particular album that can be accessed fom the website.

Should you have any further information regarding Glass that could be added to the site, do not hesitate to contact me.